Our weekends have been filled with errands, setting up the house, buying necessities, getting our bearings straight in our neighborhood.  But we have had two little “weekend” trips.

Our first trip was to the mountain top in Mokpo, Yuldul-San.   Thursday, may 5th  was Children’s Day, so Mike and I had the day off.  We walked down the parkway by our place, along the coast line, to the Dalseonggak entrance, about 30 minutes if I wasn’t dilly- dallying. The parkway was active with Children’s Day activities: kids games, snacks, face painting, and live music.  It looked like a lot of fun.     Then we passed the fish market.  There are about 20 restaurants with fish tanks out front.  You place your order, the cook retrieves and prepares your fish. Freshness counts!

We stopped for a snack at a food cart and grabbed some waffles.  Yes, delicous waffles are everywhere here.

We followed the signs to the mountain, in Korean and English, and passed a few exercise stations and vegetable fields.

Along the way we passed  an orphanage and an elementary school.  The elementary school had solar panels on the roof and wind turbines.  So cool. The entrance  to the hiking path had the distance in kilometers and the approximate hiking time, 20 minutes.  It is a  well groomed path, with stairs at the beginning, but very steep.  You are very aware that you are in a city, you can even hear traffic at the top.   There were challenging  parts towards the top where we had to boulder hop and climb the rocks, but no equipment was needed. 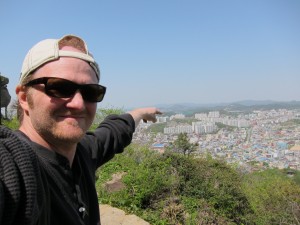 In fact, one dad climbed down while carrying his three year old!

As we climbed down some men began calling us over to them.  We stopped by their pagoda and they invited us to join them for Korean BBQ, Samgeyopsal and Soju.  We sat with them for about a half an hour, they were very kind and went out of their way to make conversation with us.  It was an excellent way to spend the day and get an idea of our new city.

That weekend, May 6th,  we went to Hampeyong for the butterfly festival.   Hampeyong is a 40 minute bus ride away. It is a small town with a big main street surrounded by a few housing developments and agricultural land.  It reminded me of New Prague.   We rode in a county bus line, it made two stops and was a very comfortable coach tour bus.  The butterfly festival runs for two weeks and reminded me of a county fair without the FFA or 4H. (boo)

There is a food court that sells regional food like Korean BBQ, red bean cakes, and berry drinking vinegar.  There is a regional

trades pavilion where we sampled local honeys, teas, rices, makkoli (like soju) and sweets, saw local textiles and arts, and geeked out.  Like all good fairs it had a midway, but this midway was at the base of a hill, so they planted flowers in the shape of a butterfly on the hill as a backdrop.  Very romantic.

There was a traditional arts and crafts area that was kinda cool.  They had local artiseans and vendors selling traditional products.  They also had a cool place where kids could make and play.

One of the most surprising things I saw was the celebration of insects.  There were insect sculptures every where, horned beetles, grasshoppers, mantis’ etc.  There was an area teaching kids about the 4 stages of Horned beetle development where you could play with the larve.  It was a beetle love fest!

Don’t get me wrong, not everyone was into it; there were plenty of 20 something women shrieking at the beetles.  But kids were walking around with cages carrrying their new horned beetles home (like goldfish, ‘cept beetlier.)

I can’t express how cool it was.  There were tons of flowers everywhere,  poppies, rape flower (canola), azelias, marigolds, flowering trees, while it was still brisk in MN.  There was so much new food and stuff that I’m still figuring out.  Oh, and there were super cool swan shaped paddle boats in a little lake.  We were there for 3 hours and I don’t think that we saw half of it.  I would totally consider going again next year.

It may not be as exciting and hip as the Formula 1 race track in town, but we geeked out on it.

P.S.  Happy Memorial Day weekend everyone!  Be safe and have some BBQ for us.  Korean BBQ is delicious, but we miss American BBQ.

3 thoughts on “Our first weekend trip”